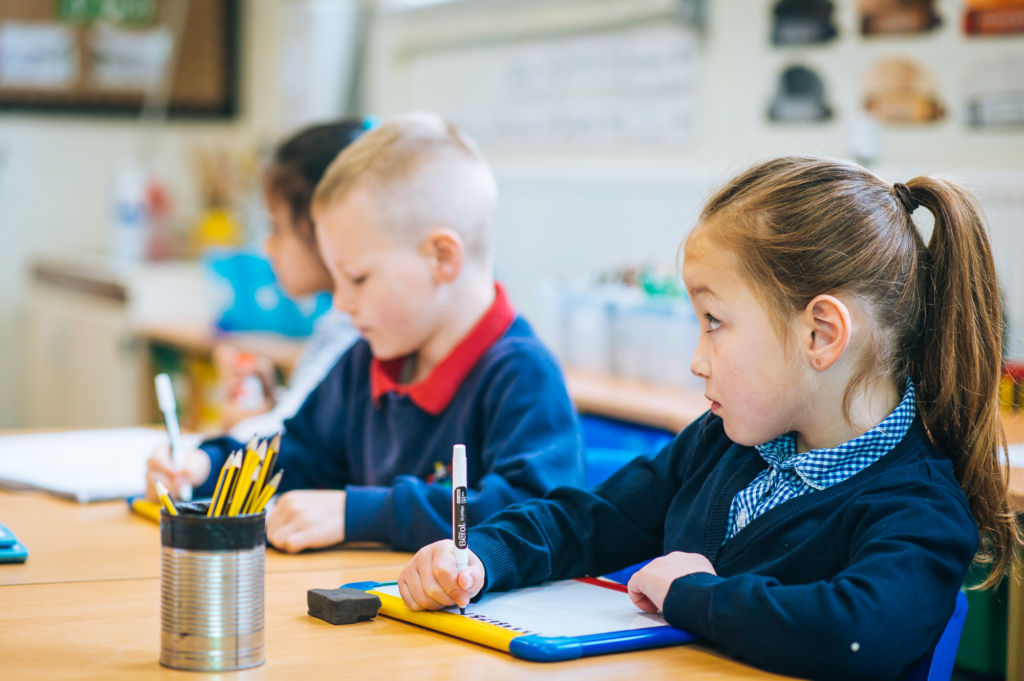 It had accommodation for 460 mixed seniors, 460 mixed juniors and 402 mixed infants! During the First World War, the school was taken over for military use and soldiers were billeted there. Pupils were moved to temporary accommodation; some to the Church of the Transfiguration and others to Wawne Street and Middleton Street schools.

The senior department reorganised as a Central Senior School for Girls in 1920. Many of Thoresby’s pupils were evacuated during the Second World War. Those that remained were not expected to attend the morning after an air raid. Calling the register in the afternoon must have been a distressing task.

After the war the girls’ school developed into a Technical School. A Junior High School for girls was formed in 1970 and mixed primary pupils remained at the site up to the age of 9.

Reorganisation in Hull in 1988 formed the current system that exists today, with Thoresby Primary School offering education for children from 3 to 11 years old.

Every morning the children of Thoresby Primary School arrive in the playground to the sound of the school bell. Rung at 8:50 by pupils in year 6, the sound can be heard throughout the neighbourhood, calling the local children to school. It is a daily reminder of Thoresby’s place at the heart of the community.The school was the last of 37 Board Schools to be built in Hull, and when it opened in August 1902 the bell was installed.

The bell was ‘cast’ at the factory of John Taylor and Co. of Loughborough, Leicestershire. The same company cast the bells of St. Paul’s in London, Holy Trinity Church Hull, and York Minster. Our bell is made of bronze, weighs half a hundredweight (about 25 kilograms), and still has its original ‘clapper’. The bell had been painted black over the years (sacrilege!), and this seriously affected the tone. It took a great deal of time and effort to chip off the old paint before the bell could be sand-blasted and then coated to avoid the bronze turning green!

One of the school’s teachers, Mr Paul Grantham, co-ordinated the dismantling and reinstatement of the bell, liaising with Mr David Stipetic, the clock custodian for Hull and Steeple Keeper of the Church of the Holy Trinity. The bell had to be sent away to Barnsley for the work and only returned at the end of February, to the great delight of the children.Having lain silent for many years, it was restored to full working order in 2002, Thoresby’s centenary year.  Parents, pupils, governors, staff and former Thoresbians worked together throughout the year to raise the money needed to pay for its refurbishment.

The Thoresbian was ﬁrst published in 1929.  At that time it was the magazine for ‘Thoresby Street Central School’.  The Thoresbian contained information about forthcoming changes at the school, such as new staffing arrangements and details about the school uniform.  It also reported on events such as Parents’ Evening and Sports Day, and it provided a celebration forum for achievements such as perfect attendance.

In a section of the magazine entitled ‘Old Thoresbians Association’ reunion events were advertised and clubs such as the walking club and the cycling club were promoted.  Thoresbians have always been proud to have attended this school and the Thoresbian magazine was just one way in which old pupils were able to keep in touch with each other and with current news of the school.

At the time of the school centenary in 2002, a commemorative centenary edition of the Thoresbian was published.  It celebrated one hundred years of the school in Thoresby Street and included vivid memories of former pupils.  These reminiscences revealed an abiding and deep affection towards the school and an appreciation of what a difference it made to their lives.

The pitch is the first of its kind for a primary school in the region and cost more than £140,000. This cost was jointly funded by the Football Foundation, Hull City Council and UEFA. The pitch incorporates the latest technology in synthetic turf which is much safer for children to play on as there is less risk of trips or falls. It replaces the school’s 40 year old pitch.

Head teacher, Melissa Milner, believes the pitch will benefit the entire community. Mrs Milner said: “The development of the new facilities really has been a community led project and everyone has shown determination and can be proud of what they have achieved. The site is already being fully utilised during the school day though PE and other activities and many local sports groups have been using it on evenings and weekends. Its great to see a project like this bring the local community together”.

The school held a day of activities for the pupils to celebrate the occasion, including a five-a-side football tournament, a staff, local coaches and ex-pupil tournament, buffet for the local community and activities including face painting run by the Friends of Thoresby. We have full use of the facility during school hours, but it is available for community use out of school hours, at weekends and during school holidays. 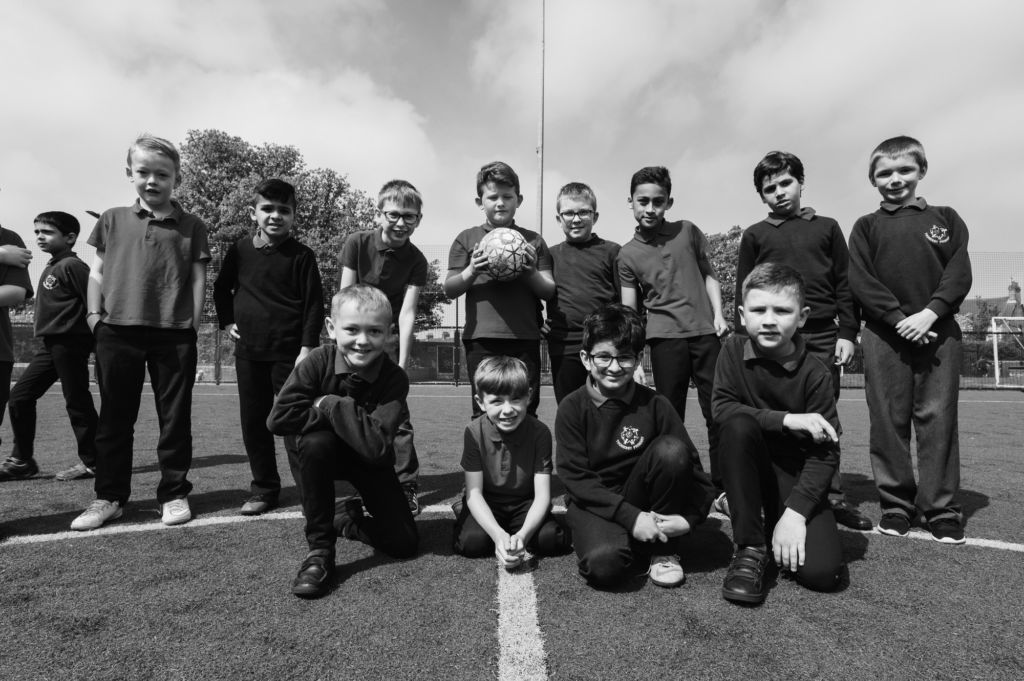 My daughter is making great progress at Thoresby. Overall I am very pleased with every aspect.

I would like to say that both our children – daughter in year 4 and son in year 6, enjoy attending their lessons and their topics they are being taught.

My son and daughter are both very happy at Thoresby. The staff are approachable and helpful and the children are offered a good variety of different opportunities.

Our daughter started Thoresby in September 2018 – she has grown in confidence and the support from her teachers is constant. We are very happy with everything the school offers and provides.

Thoresby helps us to learn that we are all unique and special in our own way.

My daughter started in September and she has flourished. Not only in an academic sense but in terms of her social skills and her open-mindedness to others – it’s been a fantastic experience for her!

Our son is absolutely thriving at Thoresby. He has really got on well with his teachers and enjoyed lessons. If asked he would say the dinners are best but his progress speaks for itself. Thank you.

Thoresby is a brilliant school and my kids love coming here.

My daughter has been coming here since nursery and has always loved the school, she is doing really well in all her subjects and I couldn’t be happier with her progress.

We love Thoresby. Both of our girls go there and have had a fantastic time. It is very supportive and nurturing.

This school offers varied education in an environment with so many children from so many parts of the world, and do it very well you see happy smiling children every day! Hats off to this school!

Thoresby management team ensure that the school is inclusive and forward thinking. I have always been impressed by the way this school is run and continue to be – especially their dedication to child protection and wellbeing programmes.

The outside area is so much fun!

I am proud to be part of the Thoresby community.

Everybody is welcome at Thoresby.

We are lucky to have Kaleidoscope every year! We learn so much and everyone comes together for a celebration.

Our son has been coming here for 8 years. He will be doing his SATs soon. He loves coming here and loves the food. He has so many friends and loves all his classes too. He gets on well with everybody and all his teachers have been brilliant with him. Thoresby is a good school.

I think Thoresby is an amazing school. The teachers are approachable and my son loves school.

Thoresby is an amazing school and the best aspect of the school are the brilliant selfless teachers who put the children at the forefront of everything.

My daughter enjoys all aspects of school life, she involves herself in many activities and represents the school in various team sports. We are pleased with all her progress.

The support from the teaching staff is very good and the pastoral care of our children, especially when needed for our son. Overall very positive.

My children are very happy at school.

All three of my children have been taught at Thoresby with my youngest leaving this year. I have fond memories of Thoresby over the years and found staff helpful and very supportive.

Thoresby is a special place.

Thoresby gives us opportunities to spend time with the coaches and develop our sports skills.

I feel the school is a blessing for parents who have the opportunity to send their kids here as they provide the best education and pastoral care possible.

Thoresby gives me the opportunity to have a great education. The topics are great!

We are very happy with Thoresby, lovely staff and teachers.

Thoresby has been brilliant for my boys, really supportive and encouraging.